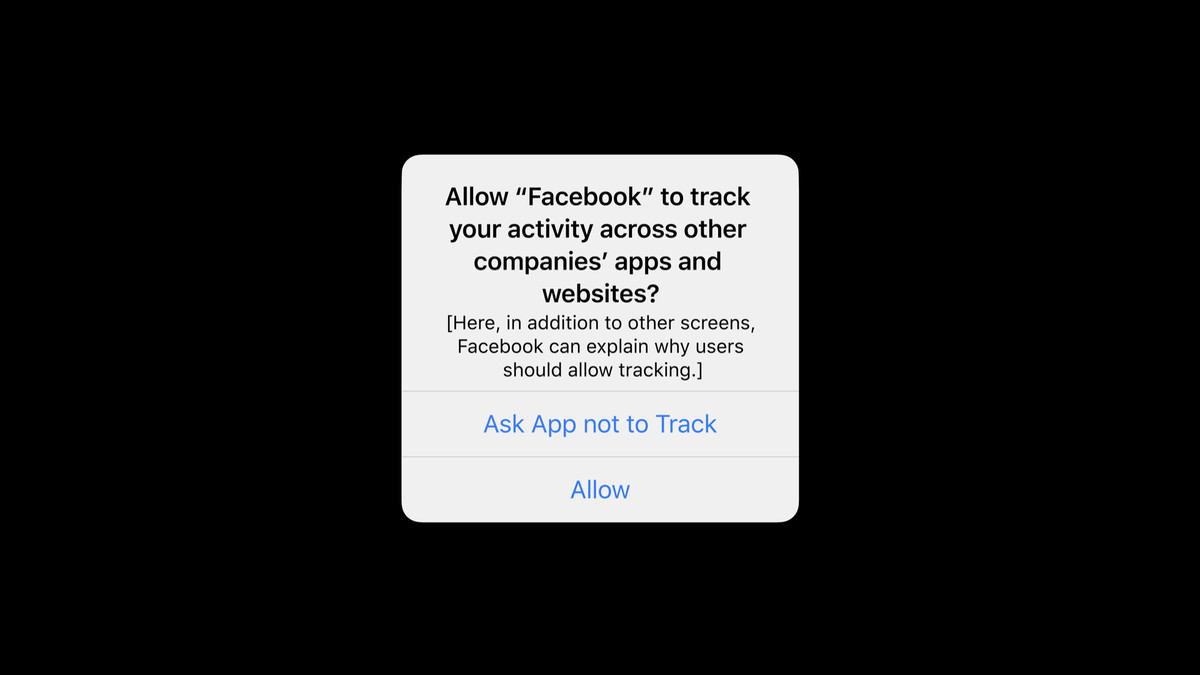 Last week Apple dropped an absolute bombshell on the digital marketing community, but from the update there may be some new opportunities. In this article, I will explain what I believe to be a balanced perspective on all the IOS 14 updates. I want to give a quick disclaimer. I am going to tackle this from an ecommerce perspective, and as a Web Developer, not a Facebook marketer.  If you have questions about what you are reading, please send me an email at [email protected]

What Will The IOS Update Change?

As you can see above, IOS users will now be asked if applications are allowed to track them. Not only does this serve as a reduction in data to Facebook’s audience network (applications that serve ads sold by Facebook), but it also effectively blocks tracking scripts in the users browser (Safari, for example). Specifically, I am talking about the Facebook pixel attached to sites that track user activity. Previously, in order to block Facebook tracking scripts, users would need to install adblockers in their mobile browsers. Frankly, this required the user to care enough to exert a small amount of effort, and know that adblocking extensions were a possibility in the first place. This was an incredibly small amount of people. The ease of tapping a “don’t track me” prompt will inevitably cause many more users to opt out of tracking.

This article is meant to inform, and is not an opinion piece; therefore, I am choosing to omit the section I wrote about my opinion on the matter. I will however speculate on what Facebook plans to do about this.

I have a feeling that Facebook saw this news coming ahead of time, because earlier this year they seemed to push more for me to use their Conversion API, rather than the pixel. Interestingly, this API takes all the control away from Apple, and even the users. How does it work? I’ll start with a quote from Facebook’s explainer page: “Conversions API is one of our Facebook Business Tools that lets you share key web and offline events, or customer actions, directly from your servers to ours. Conversions API works with your Facebook pixel to help improve the performance and measurement of your Facebook ad campaigns.”

Since I work with the Conversions API regularly, I will summarize what it actually does, or at least what I use it for. Say I go to my favorite Shopify store and order something. I checkout with my personal email, using my own card information and address. That information is stored on Shopify’s server. It must be, because when I visit my account and login, it knows my order history. Logically, there must be some sort of entry that says “Mike ordered sunglasses on December 21st” right? The Conversion API essentially pushes order data back over to Facebook, from the server, so Facebook gets your name, email, address, information about the products you browse, etc. This doesn’t atomically happen with every store, but is something that many large ecommerce sites are already utilizing. Hopefully, if I did a decent job explaining the server transfer, you understand why ad blockers and privacy trackers have no effect on the Conversion API.

How Is This Going To Impakt The Digital Marketing Scene?

This is where facts stop and opinion starts. In my own opinion, I do think these privacy changes will have to have a negative effect on Facebook; however, I think it will affect really small businesses more than larger ones. Small businesses can’t afford developers that can work around these changes. Thankfully, many ecommerce management systems, like Shopify or WordPress (Woocommerce) already have support for the Facebook API. Shopify’s support, in my opinion, has been far more clear than anyone else in making this transition.

The general rule of thumb is that if an ecommerce management system already supported the Facebook Pixel in early 2020, they will probably be ready to support the Conversion API by the time the changes roll out. With systems where Google Tag Manager needed to be used to hand code pixel support, it is likely that a custom app will need to be developed. This can be a time consuming and extremely specialized process. One of the main problems is that before it was extremely easy to just toss a FB pixel in the header of your website, and worry about specialized pixel event tracking later. Taking away this ease of use does create less total data from Facebook, and may drop results by up to 50%, when sites cannot utilize personalized tracking, according to Facebook’s official press release.

The opportunity here is that great ad tracking will be harder for many small to medium size businesses to pull off. This means that those businesses will be less likely to be able to do effective Facebook advertising on their own, and more apt to hire the right agency to get the job done. If the Conversion API means that agencies need more developers that can work in that space, Facebook marketing itself becomes more specialized. This isn’t great for Facebook, since they have an interest in getting as many business owners on board with their advertising as possible, but it could be good for agencies looking to massively outperform a prospects’ previous digital marketing efforts.